The meeting convened, and then immediately recessed so a meeting of the Local Board of Appeal and Equalization (BAE) could convene.  The BAE is really just the City Council, so the convening/recessing was a technicality required by the law.

The point of the BAE meeting was to allow citizens a method to appeal the valuation of their property.  Residents were recently mailed property valuation notices.  All in all, 5 property owners came forward to appeal their valuations.  One man said he was looking at a 24% increase in his value.  The valuations are important because property taxes are calculated using them.  The BAE listened to the property owners, and then asked the county assessor to review the valuations in more detail and report back at the next meeting, which will be in a few weeks.

The BAE meeting adjourned, and then the council meeting reconvened.

There was a public forum on the agenda to discuss new liquor license fees, but it was tabled because there was a question about if notice was delivered properly.

The council then considered a motion awarding the contract for a $200,000 remodel of the council chambers.  Apparently the project was sent to multiple vendors, but only one vendor bid on each phase of the project, so the bids were awarded to that vendor.  This strikes me as odd.  We also found out that apparently the remodel will allow a council member to Skype in to council meetings.  I really don’t know why this is necessary, or was included in the project.  It was a last minute addition that put the project slightly over budget.

Finally, the council passed a resolution establishing the election dates and offices to be considered during the 2014 election.

After the meeting, the council went into a closed work session to discuss pending litigation.

I attended the Crystal City Council work session and meeting on January 21.

The work session had three items on the agenda: Change in liquor license fees, change in pawnbroker fees, and council salaries.

The justification for the fee increases was threefold: 1) fees have not increased in quite some time 2) Crystal’s fees are lower then its neighbors 3) fees aren’t covering the city’s costs to administer the licenses. 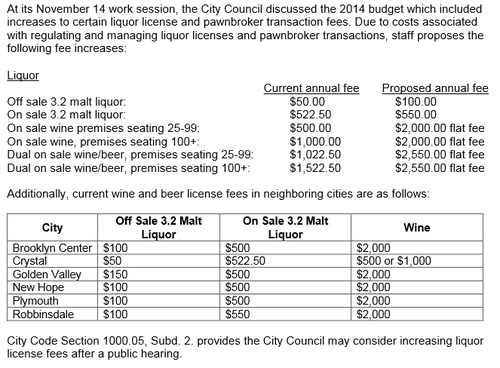 There was much discussion about the topic, with the council split. There was no clear consensus as to what to do.

A request was made to get a detailed accounting of the city’s costs that would be covered by these fees.

I was glad that this request was made, as I don’t feel that “because our neighbors charge more” is a valid reason to double fees.

If businesses have really been getting a deal, in that their fees haven’t been covering costs, then that is something that should be looked at. But I would also question whether the process on the city’s side is as efficient as possible. Just because they city can levy fees doesn’t mean they should.

I was not clear about what the next step was on this process, but I do know that there will be a public hearing before any action is taken.

There was a brief discussion on pawnbroker fees. It seems that these will be raised without much if any opposition.

At the end of the meeting the council voted to give members of the city council and the mayor a 1% pay raise for the years of 2015/2016. This is in line with the projected increases for city employees.

Council members currently make around $8,100 per year, while the mayor makes about $10,500. The increase adds about $600 to the city’s budget per year.

Immediately after the work session was the council meeting.

During open forum a woman discussed her concerns with a 55+ walk program offered by the city at the community center. She isn’t 55+ and wants to attend and bring her children. The matter was referred to the Parks board, and the city manager noted that there are plans in place to create a family friendly walk time.

The first item on the regular agenda was the approval of the garage variance that was approved at the last planning meeting.

Next the city was asked by the city engineer to approve a resolution ordering the construction of an emergency water supply. This is a joint project with the cities of New Hope and Golden Valley, which make up the Joint Water Commission.

The city has been discussing the need for the emergency water supply for some time, and this project is being hastened by the issues we had last summer with losing water after large storms hit Golden Valley.

I support this project and feel that the price tag seems reasonable.

I do have some issues with how this project was ushered through the approval process, but that’s a topic for another post.

After that the council went into closed session to discuss offers on several properties the city is trying to acquire to make room for the new public works facility.

That’s a project I support in principle, but I am very uncomfortable with the cost.

The city is allowed to go into closed session when the topic is negotiations. The meeting is still recorded and the video of the meeting is released after all of the deals are finalized.

There was one more item on the agenda, but since I had to leave for the negotiations part, I decided to go home.

The first city council meeting of the year was quite a bit less exciting than the last one of 2013.  However, the council did cover a lot of ground.

The meeting started with the presentation of some awards for the Crystal Sparkles contest. The contest is an annual effort to encourage residents and business owners to decorate their homes and businesses during the holiday season, and is sponsored by the West Metro Fire Auxiliary. There is a cash prize for the winner, though I didn’t notice how much. Here’s the flyer for 2013.

During open forum a gentleman told the council about a nonprofit he is starting, called The Light of Crystal, which is designed to promote the city. They have a Facebook group you can join, here. The idea is modeled on a similar program in Robbinsdale called The Heart of Robbinsdale. The group will host social events in the city, including a monthly happy hour.  There was also a friendly bowling challenge made by the Mayor of Robbinsdale, Reagan Murphy, to Crystal Mayor Jim Adams at the Crystal group’s upcoming bowling challenge.

Next the council appointed its new representative to the West Metro Fire Rescue District Board. The new member is a citizen, not a member of the council, which represents a win for Mayor Adams. Adams has been a strong advocate of appointing a citizen, as opposed to a council member, but had faced opposition from some members of the council.

The Human Rights Commission and Environmental Quality Commission both got new members as well.

Next the council considered a resolution authorizing the first steps toward exercising their eminent domain authority to acquire property for a new public works facility.

I am not crazy about this project- mostly because the cost seems very high. I’m not convinced we are getting the best deal we can get. I also felt that some members of the city staff overstepped the bounds in trying to get the result they wanted from the council. Nevertheless, the city needs a new public works building, and as Crystal is fully developed, it has to go somewhere, which means acquiring land. The owners of three of the four properties that must be acquired are dealing with the city. The fourth just has not responded to the city, which is what lead to this motion.

Next the council re-appointed Anne Norris as city manager, and renewed her employment contract for one year. The unanimous vote on this item was significant, as members of CUAPB (see last meeting) have been agitating to get Norris fired. The fact that the renewal of Norris’ contract was entirely non-controversial may be a sign that whatever sympathy or support CUAPB may have had on the council is waning.

Mayor Adams read the list of proposed liaisons, which had council member Joe Selton assigned to the Human Rights Commission. Selton objected, and asked to be switched to Environmental Quality instead. Selton did not give a reason for the switch, but it was accommodated.

The meeting then adjourned.